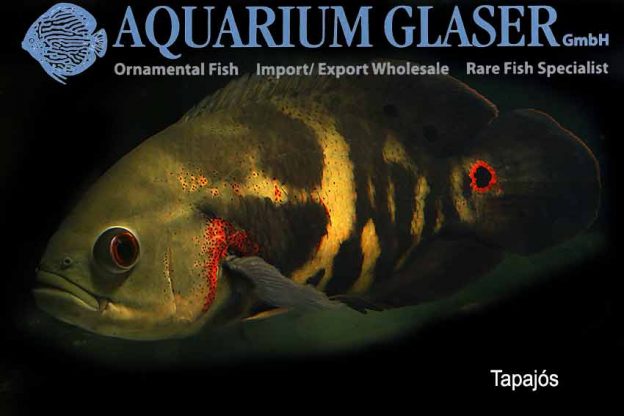 Once more we were able to import four wonderful, large (18-25 cm) specimens of the Oscar cichlid from Brazil. There is no consensus among scientists how many species should be assigned to the genus Astronotus. Most scientists accept only two species, namely A. crassipinnis and A. ocellatus. Others believe that there are many more species and that the genus Astronotus is urgently in need of a scientific revision. We think that the four current imports belong to three different species. So we do not use scientific specific names here.

A beautiful pair reached us from the state of Pará. The male has a high degree of red all over the lower part of the body, whereas in the female the red colours are restricted basically to the region around the opercle. We are sure that fish like these were among the ancestors of the artificial sport called “Red Tiger Oscar”.

Two other specimens reached us from the Rio Tapajós. They most likely represent two different species or the sexual dimorphism is extreme in this population of Oscar. One of the specimens is very slender and has a nice yellow basic colour. The other specimens reminds us strongly to the “Zebra” we were able to import last year (see http://www.aquariumglaser.de/en/large-wild-collected-zebra-oscars-arrived_en_1607.html), but this time the bright vertical stripes are rather reddish and the animal has a great number of black speckles in the face.

The village named Dekai is located in West Papua (formerly: Irian Jaya) in the district of Yahukimo. It seems to be a real hotspot for extremely beautiful species of rainbowfish. Many species and local varieties have been collected there in the past years and brought to the tanks of enthusiasts. This applies also for this variety of M. rubrostriata. It really doesn´t matter from a hobbyists point of view if one prefers to see M. rubrostriata (Ramsay & Ogilby, 1886) as a full species or only as a subspecies of M. splendia. In the latter case it has to be named M. splendida rubrostriata. 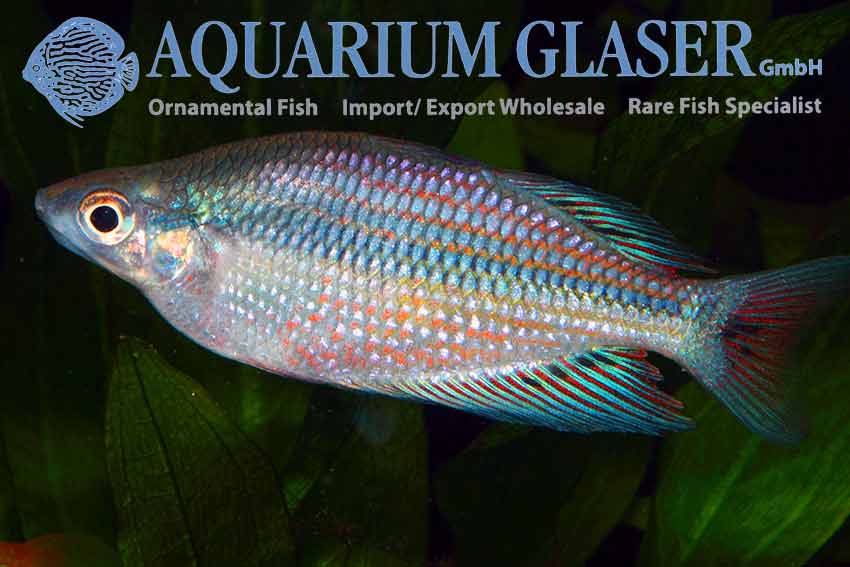 Of real great importance is the water quality for this fish. The water should be changed as often as possible. At temperatures of 24-28°C, medium hard water and a pH around 7 the fish will readily spawn. For spawning fine plant material is needed, like Myriophyllum, Java Moss etc.. Here the eggs are deposited.

One should never keep different species of Melanotaenia or other rainbowfishes together, because in the aquarium this would lead to unwanted hybrids. 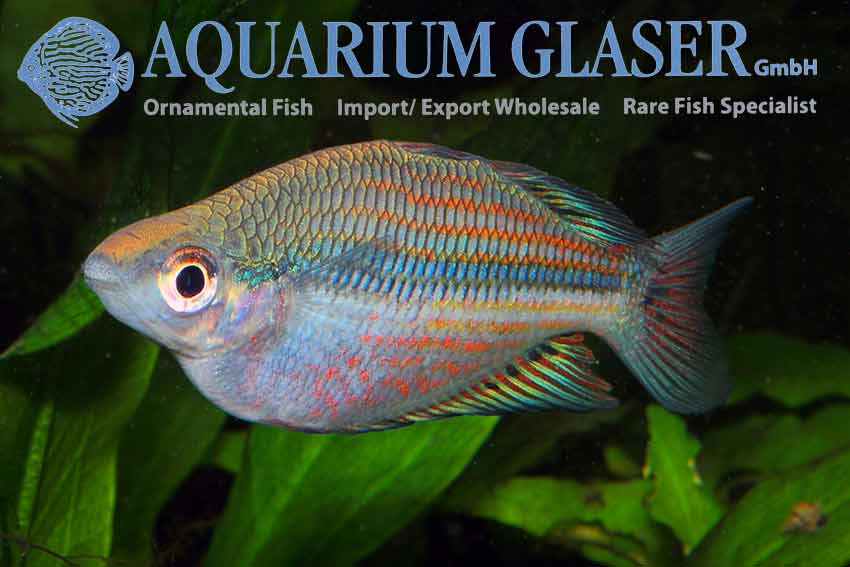 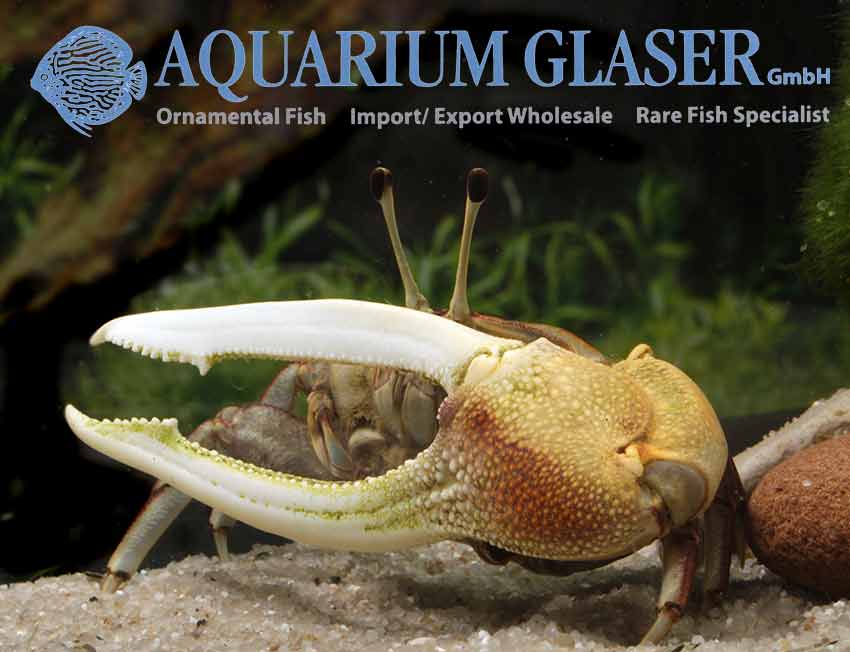 Fiddler crabs are always something very special. They live along the border of water and land. During the tide they hide in wholes in the sand. At low water the come out of their hiding places and search for food that the water left behind.

The males display their mighty claw to impress the females, but this also is used to awe other males. Within the very same species males exist, in which the left claw or the right is enlarged.

Currently we were able to import some males from Thailand that exhibit extraordinary large claws, which gain even humans respect! 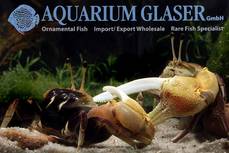 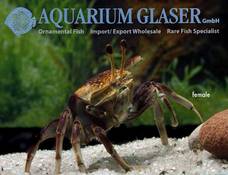 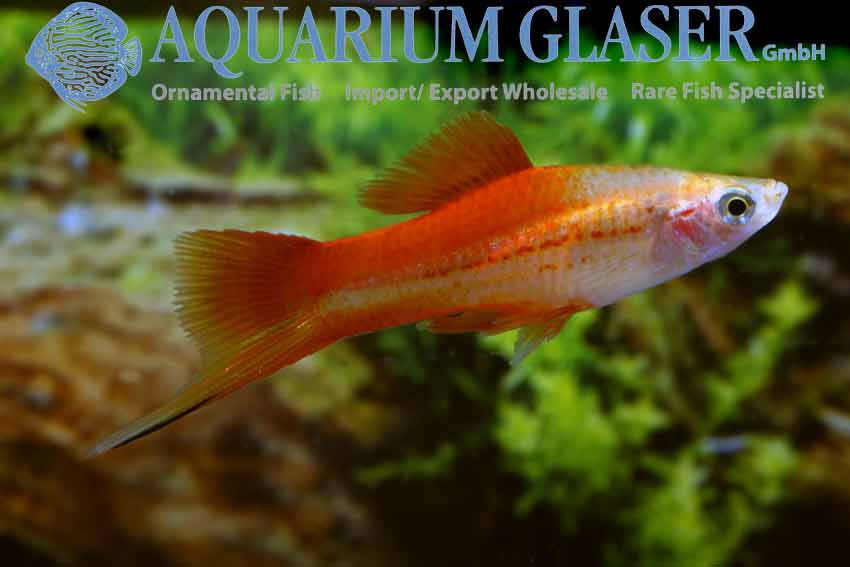 It doesn’t have to be always rare wildcaughts. Many bred sports are also very interesting animals to keep. They do not only look very nice, but are also worth to be studied in detail by the experienced hobbyist.

The coloration of the sport “Pineapple” of the swordtail (Xiphophorus helleri) for example has been crossed in the species from the Platy (Xiphophorus maculatus). In the wild the two species never cross, but under aquarium conditions it is possible to cross them with some tricks. The hybrids lok intermediate between the two parent species. But when they are crossed back on one of the parent species it is possible to obtain pure species agian, but with the colours of the other species. 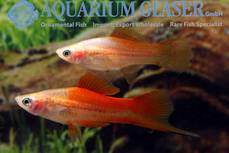 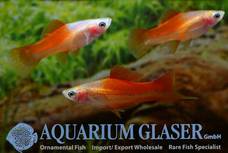 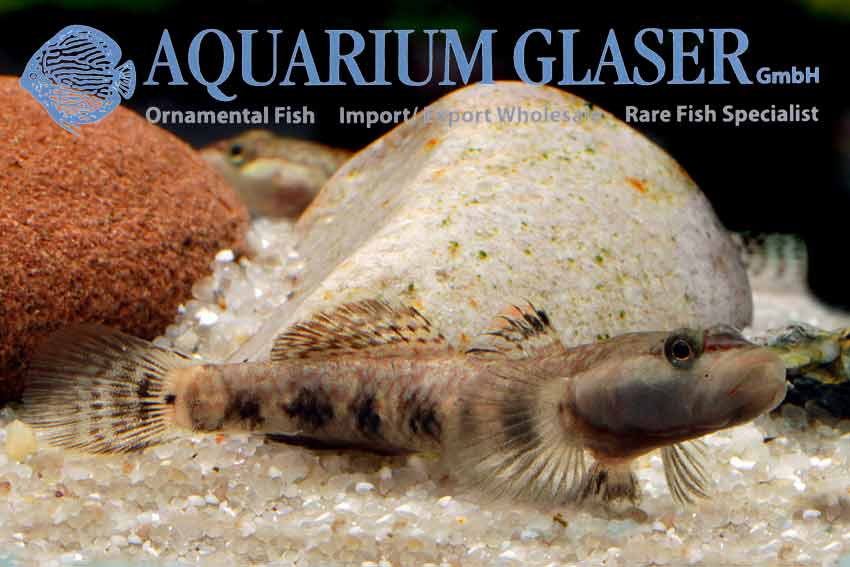 Gobies become more and more popular in the hobby. A real classic is R. duospilus, which was known under the name of R. wui for a long time. Nowadays R. wui is considered to be a synonym of R. duospilus. This small goby becomes only 4 cm long. In the wild it lives in brooks. Any addition of salt is unnecessary. The males build burrows under stones. Here the fish spawn. The comparatively large larvae can be raised rather easily. Due to the origin of the species (southern China) it can be kept without a heater. The water temperature can be between 16 and 26°C.